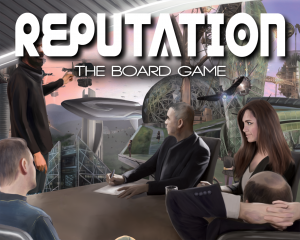 Reputation is a corporate themed bidding game in a dystopian future world. Designed by Kei Kajino and illustrated by Marco Primo, Reputation will be coming to Kickstarter in 2021.

At the end of the game, your company will face sanctions if your reputation is too low! The CEO who can make the most money without getting sanctioned is the victor!

The elite won. There was no last-minute plucky rebel group or unstoppable public uprising, well, none that were successful anyway. They became more powerful than any bloc of nations, controlling elections and passing laws. Eventually, they ran out of things they needed.

Then they started turning on each other, after one too many hostile takeovers the CEOs realized that they needed a way to let off steam before they destroyed each other.

The Draft was born, a way of easily trading ownership of companies to relieve boredom. Bosses started moving companies like children playing with different toys, and it distracted them from ruining each other.

The Draft was such a good distraction that they didn’t notice the public uprising until it had already snowballed into a movement too big to be dealt with. The governments had to listen to the people and the people wanted better public services and better pay. Companies that failed to give the impression that they were committed to helping these groups weren’t going to last long.

You are a nomadic CEO, working to achieve your corporate goals and stay on top while doing your best to appease the crowds and dodge the attacks from the rest of the elite. Can you stay on top and keep your reputation intact when everyone wants to see you fail?

First English edition will be published in Q1, 2022

The core mechanics is based off of Bidders! released in Japan in 2015 from One More Game