This is my second post in the Kickstarter series. Last time I spoke about my approach to offering reasonable shipping as a project creator. This time I want to talk about the Kickstarter page from a project backer’s perspective. In particular, I want to focus on three elements that are important to me, so I will be discussing these in the next three posts. The three topics I am planning to cover are:

Let’s get started with the first one!

When Kickstarter was still small (the early 2010s) I found most of the project I backed from the Kickstarter page. There were other sources as well such as BGG forums and social media, but Kickstarter itself was fairly new and it wasn’t widely known. Also, there wasn’t a lot of projects so it was easier to comb through.

Nowadays, I find most of the project through other means such as ads, social media posts, and newsletters. That being said, I do still browse on the Kickstarter page often and so does many other backers that I’ve spoken to. In my most recent Kickstarter campaigns, I still get roughly 20% of my backers from Kickstarter project pages. That number can make or break the project. However, when there are more than 200 other projects happening at the same time, it gets difficult to find the project that you are really interested in. This is the same problem as when you are looking for a book to read at a bookstore, or browsing for a new game to play at a game store. The project’s face, or the project’s main image, is the best way to grab potential backer’s attention!

I instantly skip through the project if I don’t see one or the other. There are a few other things I often see which I don’t care too much for. But these are to each their own:

This information doesn’t matter much to me. I typically don’t look for a project with cheap shipping or for a game that plays with a particular number of people. My usual thought process is to find a game that looks interesting, then figure out if it’s worth it or whether it fits my gaming group. So this information can come after I click on the image, in the body of the project page. Again, this is just my opinion.

What are some of the things you expect from the project image? Tell me in the comments below!

Learning from the mistakes of Construction Fever – part 2

Learning from the mistakes of Construction Fever – part 3 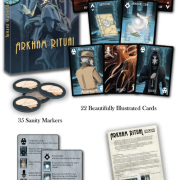 Learning from the mistakes of Construction Fever – Part 1
0 replies

Want to join the discussion?
Feel free to contribute!

Learning from the mistakes of Construction Fever – part 3